Central Karongi is not very large but offers all the necessary services that a visitor might need. The town consists of the main road and smaller road lined with shops and office buildings leading up to the bus station. There are no large supermarkets in Karongi and shopping can either be done in one of the smaller grocery shops or at the Karongi market. Karongi market is very clean and organized and can be found in center of town by the main road. There are several smaller restaurants in central Karongi offering decent, quick and affordable buffet style lunch. For a dinner or lunch with a view, the hotels along the shore of the lake offer a better option. For emergencies, Karongi has a hospital with all the necessary medical services.

Getting to Karongi and away

Daily buses onnects Karongi to Kigali, Rusizi and Rubavu. Karongi is not very far from Kigali, but the road is winding and not of the best standard. The road is currently being renovated which will improve the connections to Kigali. Riding with your own car from Kigali takes around 3.5 hours and around 5+ hours by bus. Reliable bus companies like Ritco have several daily departures between Karongi and Kigali, Rubavu and Rusizi.

Buses for Karongi depart from the main bus station Nyuabugogo in Kigali and arrive at the main bus station in Karongi located close to the center of town. Taxis and motos are always available here at any time for easy transport to any location in the area. Most of the hotels and resorts in town are located down at the lake-shore a short ride of less than 10 minutes from the bus station by taxi or moto.

What to see and do in Karongi

The first thing that strikes you when arriving to Karongi is the scenery by the lake and the islands. Taking a boat ride on the bay out to the islands is a must when visiting. The boat operators of Karongi are well organized around a cooperative with a ticket office and most activities have set prices. The ticket office can be found after the coffee shop on the left side in the bay after passing the Museum of Environment. Any boat tour in Karongi is organized by the cooperative and this can easily be arranged through your hotel reception.

Most of the islands are uninhabited but all have their own special profiles and secrets. Peace Island, one of the islands closest to town is sometimes used by the local community for grazing their cows. The men from the nearby village will swim with the cows all the way out to the island which makes for a rather interesting activity. If you want to see or join in when the cows swim out to the island, then this can be organized through the local boat cooperative or any hotel.

Perhaps the most famous of the islands around Karongi is Napoleon Island. Napoleon Island is actually called Tembabagoyi, but the popular name comes from the fact that it is shaped like Napoleon’s hat from the distance. Napoleon Island is the home to one of the largest colonies of African Straw-Colored in Rwanda. The species is endangered in Rwanda, mostly because of habitat destruction and the island is protected as a conservancy under the management of Rwanda Wildlife Conservation Society.  As the island is quite high you can climb to the top for a wonderful view of the surrounding archipelago. You can also walk up to the bat colony who spend the days resting in the trees of the island. If you want to see bats in action, then it is best visited during the evening when the bats take of from their resting place to spend the night feeding on fruit.

Monkey Island is another popular island to visit in Karongi. Monkey island has dense growth of forest and is very lush and nice to visit. The popular name Monkey Island comes from the fact that there is a small population of vervet monkeys inhabiting the island.

For a properly genuine experience, the night fishing experience in Karongi is just about as real as it gets. Every evening, fishermen paddle out on Lake Kivu under loud whistles and singing for night of fishing the sambaza. Sambaza are caught from traditional boats using traditional methods. Joining the night fishermen is an interesting experience which can be organized through a hotel or boat operator in Karongi. The experience involves a tour boat and a guide which will take you out to one of the fishing boats for the evening. You will spend the evening with the fishermen as they haul in the nets.

An interesting attraction to visit while in Karongi is the Museum of Environment. The museum is a very different experience from anything else in Rwanda with several fixed and temporary exhibitions. The main exhibition focuses on the environment and Rwanda’s energy sector. Since Rwanda has many interesting alternative forms of energy sources such as methane gas extraction from Lake Kivu this makes for a different, but informative exhibition. There is also an exhibition focusing on the geology and geography of Rwanda. On the roof top of the museum, a herb garden showcasing medical herbs has been created. The rooftop, which has a wonderful view of the bay below also has a nice café.

There are some nice walking paths near the water around Kigali. The peninsula between Bethany Hotel A and Moriah Hill is a nice nature walk close to the water. Another nice walk full of birdlife is the path next to the water between town and Cormoran Lodge. For this interested in more hardcore hiking, the Congo Nile trail passes through Karongi.

Resorts in and around Karongi

There are many resorts on the shores of Lake Kivu in and around Karongi. Most of the resorts can be found on the peninsula and is accessible through a one-way road from the roundabout central Karongi. Most of the lake-side resorts have officially three stars but are very varied in quality. Cormoran Lodge is a charming and rustic wooden lodge built on a hill which slopes down to the shoreline. Cormoran has a private beach with sunbeds on the bottom of the garden and in the main building, with nice views of the lake is a bar and restaurant. Around the corner from Cormoran you will find Inn on the Lake. Inn on the Lake is an upscale and modern boutique hotel with lake access and nice views. Across the bay you will find another set of hotels on the edge of the water. Home St. Jean is a hostel option by the lake with a variety of private rooms and shared dorms. Home St. Jean, even though nothing luxury offers good value with nice views of the lake and cozy restaurant and bar. Further down the road is the more upscale resort Moriah Hill. This upscale resort offers good value for money for those looking for a more high-end alternative. 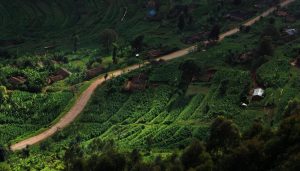 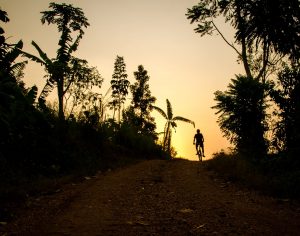 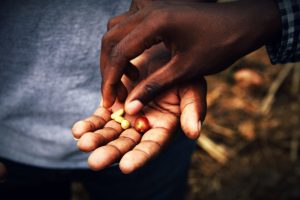 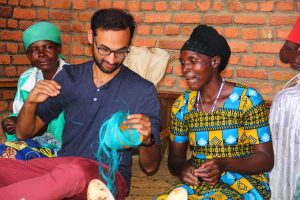